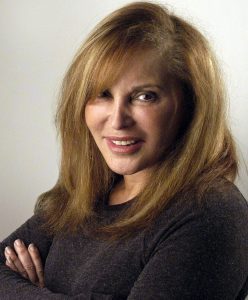 Carole A. Feuerman is recognized as a pioneering figure in the world of hyperrealist sculpture. Together with Hanson and De Andrea, Feuerman is one of the three artists that started the Hyperrealism movement in the late seventies by making sculptures portraying their models in a life-like manner. Dubbed ‘the reigning doyenne of super-realism’ by art historian John T. Spike, Feuerman has solidified her place in art history.

Feuerman’s prolific career spans over four decades and four continents. Through her sculptures, she creates visual manifestations of the stories she wants to tell; of strength, survival, balance. Feuerman has produced a rich body of work in the studio and the public realm. By combining conventional sculptural materials of steel, bronze, and resin, with more unconventional media like water, sound, and video, she creates hybrid works of intricate energy and psychology. 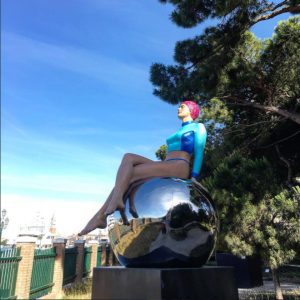 She has taught, lectured, and given workshops at the Metropolitan Museum of Art, the Solomon Guggenheim Museum, Columbia University, and Grounds for Sculpture. In 2011, she founded the Carole A. Feuerman Sculpture Foundation. She continues her focus on public outdoor sculptures, working primarily in bronze.

Feuerman seeks to connect with her viewers on an intuitive level, evoking emotion and engagement. It is often the viewer’s participation, or the object/viewer relationship, that completes her work. Feuerman maintains two studios in New York and New Jersey.