A silver bismarck needs plenty of space where its bright color and sheer size won’t overwhelm the house or landscape. It’s too much palm for a smaller property or home – making a small house appear even smaller. Genetics causes the silvery color to differ on each one. They can be steel-gray to blue-gray to silver-white…and actually have a purple hue when they’re very young. The palm itself grows slowly to 30 feet or more…and each thick, fan-shaped frond can reach 10 feet in diameter. Bismarcks will grow in full sun to part shade but do best in sunniest areas. These are moderately salt-tolerant palms, drought-tolerant once established. They’ll thrive in warmer areas of Zone 9B and anywhere in Zone 10. Once established, bismarcks can handle some cold damage. 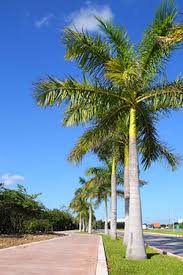 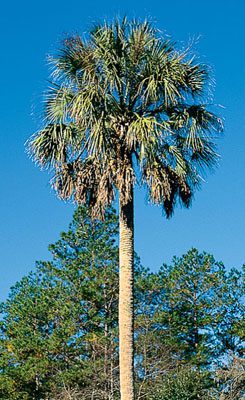 Florida designated the sabal palmetto palm (Sabal palmetto) as the official state tree in 1953. Sabal palm trees grow up to 20 m in height. Sabal is a fan-palm native to the southeastern United States, Cuba, and the Bahamas. Sabal palms are extremely salt-tolerant (can even grow where washed by sea water at high tide) and are often seen growing near the Atlantic ocean coast. The hardy sabal palm tree is also frost-tolerant and can survive short periods of temperatures as low as minus (-)14 °C.

The growing heart of the new fronds (also known as the terminal bud), gives the palm tree its “cabbage” name, since this can be harvested as a food and resembles a cabbage head in shape (this is the key ingredient for a “heart of palm salad”)” This was a common food for native Americans, but this practice is very destructive because it will kill the palm (the terminal bud is the only point from which the palm can grow and without this bud the palm will not be able to replace old leaves and will eventually die).  Trunk may be smooth or rough.