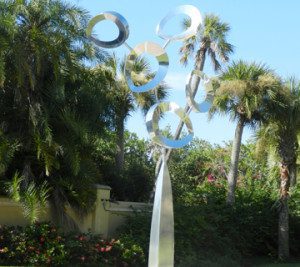 “Rondolet” – sculpted by Lin Emery of New Orleans, LA; it is a polished aluminum kinetic sculpture with all of the circular forms spinning and oscillating in the breeze.

“ My sculpture is kinetic, meaning that it moves. The elements are derived from nature, and I borrow natural elements – wind, water, magnets- to set them in motion. The rhythms are influenced by infinite variables: the points of balance, the normal frequency of each form, the interruption of the counterpoise. I juggle, juxtapose, and adjust to achieve the dance or pantomime that I want. The sculpture takes over and invents a fillip of its own?” – Lin Emery

Lin’s Hungarian father died when she was three. Although the family home was in Larchmont, New York, Lin’s mother spent the winter season in Florida, and kept her daughter with her. This meant shuttling between a fall and spring school in suburban New York, and a winter school in Florida. A final full year in a boarding school, with a Rudolf Steiner curriculum, provided the structure to earn college entry credits. At age 16, Lin entered Columbia University. From there she continued changing schools, attending Syracuse University, University of Mexico, the University of Chicago, and the Sorbonne. Whenever there was free time from classes, she painted and drew on her own. In Paris she spent evenings drawing from a model and, noticing a sculpture studio taught by Russian artist Ossip Zadkine, she enrolled. It was there that she found that sculpture would be her life.

On returning to the United States she learned welding and casting at the New York Sculpture Center. Settling in New Orleans she turned her living quarters into a fully equipped studio.[1]